Yesterday I reacted to a reading of The Obverse and The Reverse by Albert Camus by saying “[The] poor only have the sky and stars”; that, “their wealth are in dreams.”

Within hours I was told of my cousin, Michael’s untimely death. As I contemplate, again,  the happenstance that befalls us – consciousness, breath, life, I see our undeniable life parallels, too obvious to deny; front and back trajectory.

At this moment I recognize again there is greater pain in life than poverty.

He and I grew up in poverty. Poverty is physical. Like hunger, palpable, though it can be solved.  A simple dream be it food, shelter, security. These can ease poverty.

When there are no dreams, there is no ease to this life. One sees no cure. One is exposed to deep psychological bankruptcy greater than any material hardship. Deep existential pain, worse than hunger or physical want, a search for definition, a basis for hope.

As dreams disappear I sense live ends at some quickened metric to the detachment.

My cousin was a kind, gentle heart. He, as I, did not know paternal fathers. He was born and suffered of a dysfunction of his mother’s consequence. Addiction, turmoil, perhaps also not of her making, as likely as was my teen mother, however, their dreams were lost to some sad collision of truths.

Camus might inject that I was bestowed “une grâce sans prix” –  a priceless grace when an  incidental moment; that, moment of truth, my mother could not nurture another baby in a fatherless house with other fatherless siblings, who also deserved dreams.

And in giving me away to strangers, they the most honorable, I could have dreams and, by chance, she could dream again.

A gamble of faith or resignation to truth to resurrect hope. An acute difficult decision that likewise could end tragically but did not for the reverence to life of those strangers, who pledged to become my parents .

This was the grace not afforded Michael, though there had been lessons taught twice of his mother, when she birthed and struggled twice before him. For whatever reason – love, selfishness, the hollow promise of an unworthy man, who she never disclosed to her son, her pain was so unbearable, she chased each day with some sedation or illusion. She focused upon and pacified her pain, neglecting the dreams for her children.

Left on their own device, through 52 years Michael’s pain and anger was never absolved. His priceless grace was bestowed on a baby girl that, though when found not biologically his, he did not abandon. He gave as much heart and soul to embrace as was possible under the duress of a lifetime of torment. 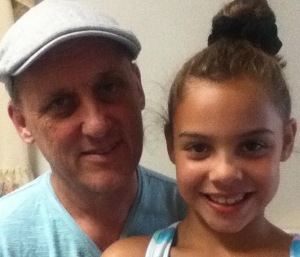 Though he could not further dream, he gave that baby dreams and his brother, who fought through these terrible circumstances, will carry those dreams forward.

For this twisted corollary, on this Memorial Day, Michael’s uncle, my decorated father, Max and I are proud of him for his compassion, heart and honor battling fate. He is at peace at last.

As a friend’s birth date passes, I celebrate him by re-publishing this edited piece? He was one of a kind. He ran with gangsters in the east and from the cops all the way out west. He was no gunslinger. He was a friend to Medicine Men, patron of “humans”. He was a “knight of the road” in his wagon filled with folksy, street wisdom and charade. He saw clearly into the future yet didn’t have enough time to accomplish the tasks that his ambition craved. But to be with Ralphy, it was the ride of your life.

The life you breathed into our lungs. The dizziness that we felt as we followed your anecdotes and schemes. You made craziness seem real. The real you made crazy. And now, it’s twelve years since we hugged that last time in that dream.

After running along the mountainside, as we did in life, I knew it was the final hug; that, tight, oddly conscious, yet perfectly inevitable feeling, then we walked to that ridge and sat at the edge of the other side. Our legs playfully swung like restless children fishing on a pier. Our legs dangled over an indefinable universe; that, near-blinding, vast opulent glow of infinity. It was brighter than any imagined or humanly seen.

Saturn spun below. Jupiter towered before us. Planets hung harmlessly with stars shooting around the silent nothingness into a dark vanishing point of galaxies.

In that comforting silence, hardly could we know where you were heading. Had you brought me along to lean upon before that unknown? No matter, thank you for taking me there.

è stato il più magificent addio. A magnificent goodbye; that, which mortals nor heaven could ever contrive. Incorruptible. Supernatural.

As I drove silently for hours to your memorial my ears rang a piercing repeated riff.  As I listened closer then and later, as if you whispered it in my ear, it was “Like A Hurricane” .

Had it all come clearer to you, because it answered much for those who could never understand. You were a dreamer and time had just slipped away before you could harness a reality from the power of dreams. In the end, you were susceptible to nature.

As the drums beat and your tribe sang, my vision blurred. My throat choked close. I am sorry if I failed. If I failed when I couldn’t relate this experience to those who gathered; those, who loved you. I was paralyzed by the experience, stupefied by the love. All of us, your children.

Overwhelmed, I couldn’t speak of what we shared in that quixotic visit. The path before you; that, unknown path shared with me. It was simply all too much. It may have been too much for them but, that defined you.

We were just children. Susceptible. You blew into our lives. There was a calm in your eyes as you spoke madness. The swirl of your mouth as that smile grew with the insanity of each word you spoke. We wanted to love you but we were always getting blown away.

On our last earthly, mortal moment, I told you, “I’ll see yay sooner… than later” but as in life you beat me to it and so we parted on your terms in a beautiful dream.

You blew me away one last time. ti amo, Ralphy!

How To Do Stuff Online
Maxey Menges

“Each generation must discover its mission, fulfill it or betray it, in relative opacity.”

I see patients in the clinic everyday. I am always saddened that I never discuss with them about what real health could be like or how to pursue the state of real health. Being healthy is much more than just being free of disease. The Dalai Lama believes that “ the purpose of life is happiness” – I would like to explore what is meant by happiness and how it is related to real health. This blog is for people wanting to explore the necessary components of real health and happiness. I will look at the ancient traditions and the scientific approach in moving towards my goal of real health and happiness. I would dearly like you to join me in this important task for the benefit of all humanity.